Here in the printing industry, we want to do our bit for the environment. Yet, the parameters under which we work have historically made this more challenging than in other fields. Indeed, the very products with which we craft our wares contain chemicals harmful to the environment, and to those that work with them, thereby creating an issue with both environmental impact and PR within the field.

The good news is that there is a revolution happening in the large format print industry right now. One that will transform both the way that we work and vastly reduce the impact that we have on the environment too. Keep reading to find out more.

The problem with traditional, solvent based inks

The problem with ink is that traditionally it contains a variety of chemicals that are hazardous both to the environment in which they are used (the print floor) and the environment at large.

The main culprits in such inks are solvents, with hard solvents, in particular, giving off noxious fumes such as hydrocarbons and alcohols and acetates, as well as glycol ethers and glycol ether acetates among others as they dry. These fumes can cause issues for those that work for them, as well as damage to the environment.

Of course, the advent of eco-solvents was designed to resolve this issue, and while the fumes given off by them are less toxic, they have not resolved the issue entirely but just reduced it. The good news is that there is a new type of ink that is replacing the ones in current use. Keep reading to find out more.

Not an entirely new concept in the industry, the product that is currently transforming the large format printing sector is water-based ink. These new inks are being developed explicitly to avoid the release of noxious fumes as they dry, as well as reduce their impact on the environment in other ways too, something that makes them far more sustainable than their predecessors.

Indeed, it’s not only the ink itself that is better for the environment, but the entire process of creating, using, and disposing of the ink and its accessories from start to finish, which is great news for everyone involved in the process too.

Kinder to your print room employees

In addition to being a more sustainable option for large format printing, these new water-based inks are so much better for those that handle and work with them. For example, unlike traditional inks, the water-based variety is classed as non-flammable and non-combustible, which makes them far safer to use, store, and transport.

Water-based inks are also odorless and free from solvents, which means that they do not contribute to a working environment characterised by bad smells, and noxious gases, improving both the working conditions and safeguarding the health and well-being of your employees. The odorless quality of these new inks also means they don’t require such strict ventilation provision as traditional solvent-based inks either.

Better for your client

Water-based inks are just better for your employees though, they also offer a safer and more appealing product to your clients. After all, any customer wishing to display printed products in an enclosed space won’t have to deal with the strong smell that is synonymous with solvent-based inks.

Kinder to the Environment

Inks with solvents are bad news for the environment too because they are among the substances that can damage the ozone layer, a process that is caused by global warming and responsible for many major ecological crises worldwide.

Happily, as water-based inks are free of these solvents their impact on the environment is vastly reduced, thereby ensuring we in the printing industry do our part in protecting the planet for future generations.

Anyone in the printing industry will know that there is a great deal of waste that is created on a day-to-day basis. It’s not just the plastic cartridges that the ink comes in that can be difficult to dispose of properly due to the inks’ hazardous nature, but the print heads as well.

Fortunately, with these new water-based ink, a lot of these problems are solved. In particular, the swap to cardboard cartridges means that they can, at least in part, be recycled rather than thrown away to end up in a landfill. Some water-based ink manufacturers even operate their own returns system to make this even easier for users.

These new water-based inks truly have the potential to transform the large format printing industry, reshaping it into one that prioritises both sustainability, and the safety and well-being of its workers. A welcome change for all involved, to be sure! 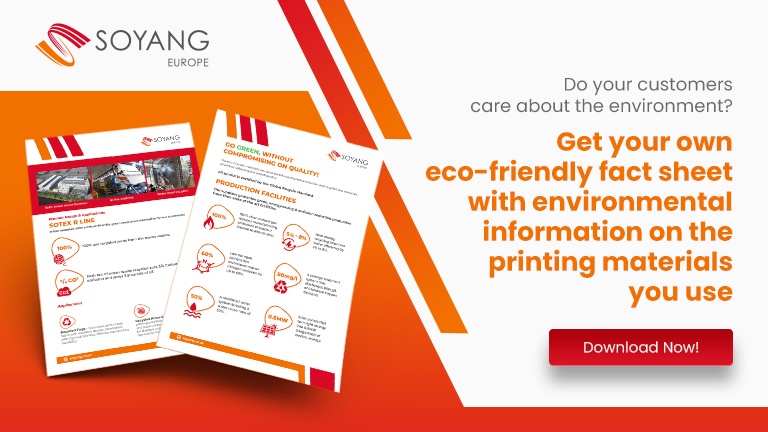